When most people think of Northeast Georgia, beautiful wild and scenic trout rivers come to mind; for eight months of the year, these scenic rivers can be considered a blue ribbon trout stream supported by local hatchery efforts. However, the months of May through August are occupied with a redeye bass species that is known for its ferocious takes and excellent fighting ability – the Bartam’s Bass. Fortunately, a few weeks ago, I was able to go on a camping/fishing trip with my Dad and a good friend from college.  After looking at maps and using previous wade trips as our guide, we scouted a 6 mile float on one of these remote rivers.  Little did we know at the time, this would be one of the most memorable floats up to date. 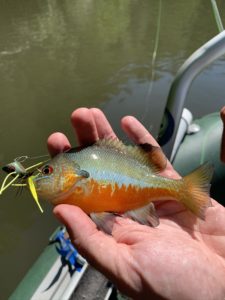 The day started off with a bang when my buddy Parker’s (Lil’ P) first fish was a solid 11″ Bartram’s on a popper. We cheered with a stout Bloody Mary and were excited for what the rest of the day had in store.We had consistent action from bass, redbreast, and trout alike. It seemed like every time we came upon a nice slack water eddy next to current, there was a Bartram’s waiting to ambush a popper.  Bartram’s are known to strike hard and put 4 and 5 weights to the test.  The day was also littered with the occasional trout located at the head of feeder creeks and springs.  I knew to be on the lookout for these because a year prior, I had landed a 20″ rainbow at one of these confluences.

Such luck was not on our side but we still managed a few nice rainbows and even a brook trout.  As the day moved on, fishing slowed down so we decided to switch to streamers and popper/dropper rigs.  The streamer was a variation of a white woolly bugger and the dropper was a Pat’s rubber legs.  Both subsurface flies are a classic go to for summer Bartram’s Bass.  After the change, we had success picking up fish here and there, and all of the sudden, the stars aligned. After most of the day on the oars, my buddy offered to row and give me a shot at the action.  Fortunately for me, that happened to coincide with an epic yellow stonefly hatch. I switched to my go to chartreuse Boogle Bug and went to work. 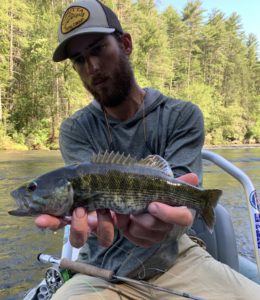 ings.  We came to a perfect spot where a deep run came to a slow, bubble filled hole.  My Dad and I looked at each other and knew this would be the spot.  I made a cast to  a downed tree and two pops later was hooked up with the fish of the day.  After several jumps then digs to the bottom, the fish was netted and screams could be heard from Greenville.  We couldn’t help to notice the emphasized markings on this particular fish.  The dark substrate brought out every single nuance in the bass’ pattern and highlighted why these fish are so special.  After a perfect release, it was time to call it a day and head for the take out.

We knew we had hard work before we could call it a day, sit around the campfire and drink a few tall boys.  Our other shuttle vehicle was not four wheeled drive and could not cross an intersecting creek near the takeout. Thus, I had the brilliant idea of leaving the take-out vehicle at the crossroads, half a mile from the mouth of the creek.  Looking at a map before hand, it only seemed like a short distance from the mouth of the creek to our shuttle vehicle.  I was wrong.  We carried the raft .5 miles up waterfalls, long runs and  strong currents to get to our take out destination.  Two hours and a fully submerge iPhone later, we reached our way to home.

Upon arrival, we cracked open a cold one and reflected upon the day. Was it worth the 2 hour shuttle time, multiple cuts and bruises, broken rod and ruined I phone? Absolutely. All I can think of now is this: When can I do all this again? All for a fish no larger than 14 inches. 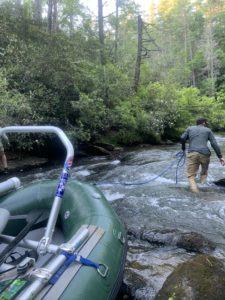